We will speak today of KNOWING versus BELIEF.

Belief has ever and always been of mind, of ego. Which is not the highest God part of you. Belief is engineered by need. Need of and for acceptance and approval from a source outside of the Self.

Belief is a process influenced, ingrained and produced by conditioning of all types – parental, societal and religious, amongst others.
Belief has little place in KNOWING yourself as God. In fact, belief could be said to be God’s enemy. While God has no real enemies in Truth, belief is a figment of yet another aspect of ego that sneakily works towards overwhelming and polluting the mind.

Once the mind has been sold on such concepts or beliefs, these then become what the world calls ‘values’ – your moral compass. This is based on your understanding of ‘right’ and ‘wrong’ in yourselves and the world both.

In order to know thyself fully in God one must therefore embark on a process of knowing these beliefs and values within and from whence they came. It is not enough to say ‘I believe in the power of Light and Love’ and expect that this belief will alone carry you to God.
For again, that which is of mind or dominated by it, cannot KNOW God – in its entirety.
While there is external influence on mind, there is conflict, inconsistencies and obstruction which hinders the free flow of this KNOWINGNESS.

It is certainly a Catch-22. For without mind you cannot function in thinking – a necessary process to arriving at and in the Truth of KNOWING. True KNOWING, when you are in it, emanates, however, not from the mind but from the heart or heart-brain – the place of your connecting point to God within you.

It flows like an eternal wellspring. Its essence moves through you, as if you are the river bed and the rushing waters of life both. You provide only the clear channel for it to move through and out of you, without hindrance of the mind’s ego manipulations which obstruct the flow.

Your Higher Self/God Self instruction is but to be the vessel for this KNOW-ledge. You are the river bed, in existence to house the flow of Life rushing through you, that it may feed into other tributaries, and together, flow into the larger sea of Life. Thus may all experience through you, KNOW-ledge, and come to KNOW their own.
Sipping of your individual KNOW-ledge offerings may well be that particular flavour which your brothers and sisters thirst for that may trigger their own flow in KNOW-ledge, so to speak.

But know this: you cannot hold to mind alone for the gift – that is already yours – to be active.
Needs must be that your journey into yourself/God within requires an emptying out of the mind trash. Otherwise the space for such a flow cannot exist due to the blockages.

How to deal with such?
First, know what you, as God being you, is not. Know the ego's modus operandi. Know the parts of you that speak constantly to yourselves in negative terms will hinder your flow of KNOW-ing, as do the many ways you keep yourselves in the lower vibrations.

Here we mean allowing feelings and states of mind such as unforgiveness, guilt, anger and more to dominate your consciousness on any given day.

All of these are BELIEFS about the Self, and often false, at that. And the continued works of the ego which strives only for the upper hand in all things pertaining to your existence on earth.
Being risen in the higher Lighted states allows for easier access to hear within and KNOW.

See your mind for what it is – a sieve that you use but to retain the purest grains of God consciousness, which you already are. And not a mechanism that you or others use against your Greater, Knowing Self.

You and your ‘parts’, mind included, are God’s. Transform that soil into a fertile river bed, ready to receive His flow that He can take hold within you.

And thus can the guidance of the KNOWING within you bless your own and the journeys of others.

Me to EM[my HS] smiling over something which recently occurred :

"You/we are quite a no-nonsense chick"

EM: "Aaah, it is when we stand firmly in our sovereignty, speak words of truth firmly, in and with love we are on purpose...we are form-id-able [SK: the form is able]...as the one called J recently told you". 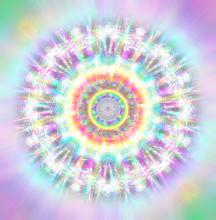