It's almost always with dismay and a sinking heart I read about the ongoing plight of the Palestinian people.
For decades they have endured; had their land pillaged and plundered, been raped, tortured, imprisoned and murdered unjustly. And continue surviving as the victims of racism by Israel on land that remains essentially theirs, the Palestinians.
All while the plots and ploys of the Elite continue to hold those people and that region in a state of ongoing, unresolved tension. This IS their game, after all...

It ends only when that fraction of humanity's controlling Zionist Khazarian psychopaths (who are barely concerned with publicly passing themselves off as human anymore in their final, desperate gasps of Life!) are once and for all removed from the face of this beautiful planet.

Then, and only then, does this region, along with the rest of the troubled world, have a chance at rebuilding towards the sovereignty and peace all the peoples of this earth so richly deserve. 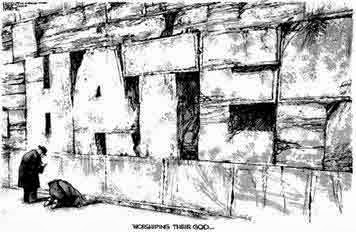 “We are not far from seeing the day when our land is cleansed from terrorists,” said Rabbi Dov Lior, the prominent, controversial, nationalist chief rabbi of the Hebron-area settlement of Kiryat Arba.

The rabbi was speaking Thursday following a tour with several Jewish visitors at the Temple Mount, the religious site holy to Jews and Muslims in the Old City of Jerusalem.

The rabbi was outlying his “vision” for access to the site, which is restricted for non-Muslims, according to Israeli law. The Temple Mount is controlled by the Muslim Wakf, but security is overseen by Israel. Non-Muslims are allowed to visit, according to instructions by security forces, but all non-Muslim religious ritual is banned.

“Our generation is charged with reclaiming the Temple Mount” and returning its sovereignty to the people, Lior said.

One of the most outspoken religious leaders supporting the Jewish claim to the entire Land of Israel, Lior added that he didn’t know “how to get rid of them [Arabs]. We’re not far from seeing the day where our lands are cleansed of terrorists and their supporters. They can go to Saudi Arabia.”

“I’m not saying we shouldn’t help them from a humanitarian point of view. If need be, we’ll build stables for their camels. In Saudi Arabia. Not here,” he added.

In 2011, Lior made very similar comments, calling Arabs “camel riders” and “wolves” who “hate peace,” adding that they should be given the “right of return” to places like Saudi Arabia.

Lior is affiliated with the hard-right Tekumah party, which merged with Naftali Bennett’s Jewish Home before the elections earlier this year.

Tensions on the Temple Mount have been running high in recent months, especially during the period of the Jewish High Holidays, when non-Muslim worshipers and tourists planned to visit the site. On several occasions, clashes between Palestinian worshipers and Israel Police forces broke out in protest of such visits.

Palestinian Authority President Mahmoud Abbas said Friday that he was considering an appeal to the United Nations Security Council over what he termed as Israel’s continuous violation of Palestinian property, especially the Temple Mount, as well as ongoing settler violence in the West Bank.

“Israel has no right to split up the Al-Aqsa Mosque, neither physically nor in terms of prayer times,” Abbas said, and stressed that “all East Jerusalem is Palestinian.”

Posted by Goldsalchemy at Tuesday, October 15, 2013