The Compassion Of Lions For Humanity

Good sunny morning to you!

I've posted this due to the heart-warming element of lions' behaviour towards humans in this piece, as well as a reminder of appreciation...for our own lives.
The piece illustrates the natural compassion that lions and all animals hold within them, even in the face of continuous persecution and being murdered by humanity for greed and profit. And they demonstrate a serious lesson to humanity.
If the situation were reversed and it was humans beings permanently hunted and murdered by lions (or any other animal, for that matter), I believe the bulk of humanity would have long forgotten compassion and would rather be permanently in attack or defence mode with any animals coming near them! Yet despite the torture animals have experienced at the hands of man and in a country where they are regularly hunted, we witness this type of demonstrated wisdom.
Besides the fact lions are my personal special animal, this is truly inspiring.

Secondly, and of equal importance, this story serves to remind us of the deep gratitude we should be holding for our own lives. Those who read here that chose to be born into a relatively 'freer' society, that is. At least in this external regard. Ones where we have the luxury of choice to pursue the fulfillment of a personal love, consisting of mutual and equal feelings between two. Rather than be born and raised in a society where almost 3/4 of marriages exist as a result of kidnapping/abduction.

My love to you
Shellee-Kim 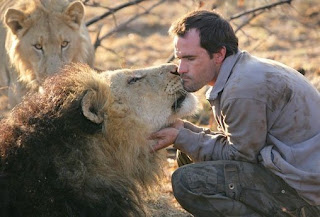 Quote:ADDIS ABABA, Ethiopia — A 12-year-old girl who was abducted and beaten by men trying to force her into a marriage was found being guarded by three lions who apparently had chased off her captors, a policeman said Tuesday.

The girl, missing for a week, had been taken by seven men who wanted to force her to marry one of them, said Sgt. Wondimu Wedajo, speaking by telephone from the provincial capital of Bita Genet, about 350 miles southwest of Addis Ababa.

She was beaten repeatedly before she was found June 9 by police and relatives on the outskirts of Bita Genet, Wondimu said. She had been guarded by the lions for about half a day, he said.

“They stood guard until we found her and then they just left her like a gift and went back into the forest,” Wondimu said.

“If the lions had not come to her rescue, then it could have been much worse. Often these young girls are raped and severely beaten to force them to accept the marriage,” he said.

'Some kind of miracle'
Tilahun Kassa, a local government official who corroborated Wondimu’s version of the events, said one of the men had wanted to marry the girl against her wishes.

“Everyone thinks this is some kind of miracle, because normally the lions would attack people,” Wondimu said.

Stuart Williams, a wildlife expert with the rural development ministry, said the girl may have survived because she was crying from the trauma of her attack.

“A young girl whimpering could be mistaken for the mewing sound from a lion cub, which in turn could explain why they didn’t eat her,” Williams said.

Ethiopia’s lions, famous for their large black manes, are the country’s national symbol and adorn statues and the local currency. Despite a recent crackdown, hunters kill the animals for their skins, which can fetch $1,000. Williams estimates that only 1,000 Ethiopian lions remain in the wild.

The girl, the youngest of four siblings, was “shocked and terrified” after her abduction and had to be treated for the cuts from her beatings, Wondimu said.

He said police had caught four of the abductors and three were still at large.

Kidnapping young girls has long been part of the marriage custom in Ethiopia. The United Nations estimates that more than 70 percent of marriages in Ethiopia are by abduction, practiced in rural areas where most of the country’s 71 million people live.